I had heard a lot about Spain and Italy both.  How lovely they were how people could spend weeks there just soaking up the scenery etc.  I however did not find either place to necessarily be unique or exceptional in any way.

The Gaudi cathedral in Spain was one of the most spectacular pieces of architecture and awe I have ever had the pleasure of seeing.  As you come up the escalator from the street and as soon as you pique the top you will be engulfed by the enormousness of this particular building.  It is worth going inside and just standing around the pillars, the craftmanship the unique vision that was Gaudi.  It is still in the process of being built, finished, and to watch them work and to see the details, the thought process of this amazing structure is worth the time.

We did not go up into the elevator to see it from the top down, because even in non-tourist season it was a two-hour wait and you were charged another fee to use the elevator.  But I imagine, and have heard that it is worth the wait and the trip to the top.

Take your time here, see all that you can see inside and out.  Take photos and take it all in.  It is spectacular.  But during tourist season you will find a very long wait to even get into the cathedral, so be prepared for that. 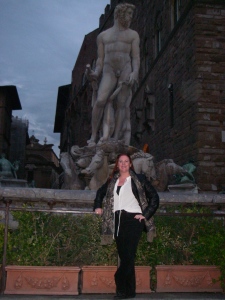 Spain in itself was not necessarily the spectacular place that others had made it out to be. The food was good, and the wine was very inexpensive and tasty.  But the people were not very friendly and if you were not dressed like them with all their furs and expensive jewlery (honestly who brings that stuff on their travels)  or you seemed like an outsider in any way, you certainly knew by their looks and whispers that they were not exactly excited to have visitors there.  I had heard there was dancing and singing in the streets and people were happy all the time, but we walked and rode and traveled all through Spain and never got a sense of this at all nor did we see it anywhere.  Perhaps it was a bad time, or perhaps we had a bad experience.  Either way it was what it was at the time.

But we did fall in love with the Iberian ham, so much so that we had some shipped from a vendor in Virginia for our wedding reception.  It’s very expensive but it is some of the best meat we have ever eaten.   Here is a small look at what this ham is:  http://www.ibericofoods.com/about_iberian_ham.php

We did enjoy the small appetizers and wine that you got before dinners.  You could go to the restaurant and for a small charge, order up some wine and ham and bread and just sit and enjoy each others company before going to a dinner.  But dinner isn’t usually eaten until around 9:00 and most restaurants don’t open until 7:00 or so, so if you are used to eating early it might be good to get yourself some appetizers.

In many countries they actually turn off the AC during the winter months.  And when I say turn off I mean the whole country turns things off so it’s not possible to get AC in your hotels.  So be prepared for it to be warm even late in the year.  In the evenings as you are walking its cool, but your room will most likely be hot, sometimes too hot to sleep.  And many hotels do not have windows that open or that open very much, so that you even get a small breeze.  We just got used to being too hot to sleep…

We rented a car and drove all over Italy.  The people there drive like mad men, so be prepared.  We saw some nice scenery but nothing to write home about.  The hotel rooms were small and the beds were not very comfortable.  The people not as friendly as you might think and be careful they say they all speak English, but that is not the case and you can have trouble with language even in places like Venice and Florence.

Venice was one place I was very excited to see but then somewhat disappointed when we finally did arrive.  It was not tourist season but the city was so packed it was hard to walk through it.  It has a funny smell, like mildew.  It is sinking and so there is a lot of water on around.  People just throw their garbage in the streets, and let their dogs do their business on the streets and alley ways.  It smelled terrible because of the garbage and the mold from the stagnant water.  It was not very well cared for, the structures are falling down, they are leaning and they are dirty.  It takes hours to get into any structure like a church or museum.  The restaurants are packed and you have to stand even for a bite of pizza that takes an hour to get.  The people were rude,  they don’t look you in the eye and they don’t say hi they just keep on walking and if you are in their way, you better move because they are going to run you over.

My husband really like Venice and had a little different vision/sight of it.  I prefered Florence.  It was old, but cleaner, the structures were somewhat more modern and it was not as tight to walk around and take photos etc.  There is so much shopping there, leather esp.  purses, jackets, wallets, its nuts!

A friend of mine loves Italy so much she says she would go back year after year.  But I disliked it so much I probably wont go back.  I did get some good photos and we did have a good time being together experiencing what we did.  But on a scale of one to ten, I give Italy a 4.  And this was my second time in Italy, I had previously in 2004 been to Rome and my experience was much the same as you will see in one of my other posts.